I often get messages or emails from people, both in my area and out of my area, who are thinking about going tiny and want to know two things:

I have to be honest, every time I get one of these messages, I groan a little bit on the inside.  Not because I’m annoyed by people reaching out, but because I feel like I don’t really have any good answers for people!  Recently, Kathleen from Tiny House Tiny Footprint forwarded me an email she got from someone in my area who, after reading her blog post about us, wanted to know more about our experience with zoning.  As I was writing a novel in response, I thought it might be useful to share it here, in the event that it helps someone else with a Tiny House, or thinking about a Tiny House, find a place to live.

So here it goes; this is our experience, stage by stage, with a little lesson learned at each stage.

So before we built the TH, I started sifting through the Rochester City Code to see what the regulations were around utility trailers and RVs on residential property, because we owned a house in the Cobbs Hill Neighborhood and were planning on keeping the house in our yard, at least for a short period of time. What I found there is that the city doesn’t allow trailers or RVs of any kind on residential property, at all.  We had a neighbor who owned a lawn care business, and stored his trailers on his property, and he was constantly being cited for it.  He would usually just move the trailer for a few days and then bring it back and wait to get cited again.  We stored the TH in our yard anyway, knowing that a citation would likely come our way, and it did.  When you get cited, you have a period of time (I think they gave us 30 days originally) to move it off the property.  We didn’t move it, and got cited a few more times, and they became increasingly severe, with the penalty costing more and more.  We finally moved it (we didn’t pay because we worked with the citation officer to keep him updated on what we planned to do) to a friend’s yard somewhere out in the country, near Henrietta.  We stored it there for a few months while we worked on selling our house.  Lesson Learned: a citation has some flexibility, and if you are in a highly visible place, or have wealthy neighbors who might be annoyed with a tiny house in their midst, they WILL call you in (and call you in again when you don’t move it.  And again after that). 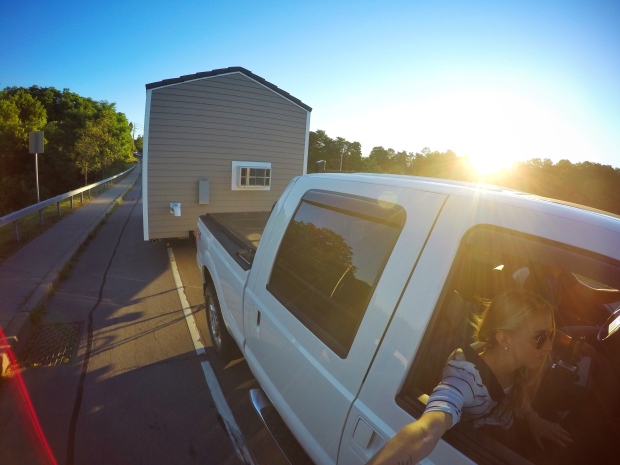 While we were selling the big house, I started searching for vacant properties in the area that we might be able to move the house to.  We were most interested in owning our own property and not having to live on someone else’s land.  We knew that we would probably have to work through some town messes in order to do so, but we were willing to do all of that.  The first property we looked at was in Webster.  When we went to the town to talk about the possibility of either getting a variance or amending the code, they basically laughed at us and told us it would never happen.  Lesson Learned:  Some towns won’t even entertain the idea of a tiny house in their midst.  We could have gone through the zoning board I’m sure, but it didn’t seem very encouraging.
After that, we went after a small property in Brighton.  We actually put in an offer on it (go big or go home), but made the offer contingent on approval of the tiny house by the town.  We hired a landscape architect to render drawings of what we wanted to do with the property (to make sure they knew we weren’t going to be an eyesore), and went to the town with said drawings, our house blueprints, and a packet with some background and photos of our actual house.  The town was really open to the possibility.  They described the process of getting a variance, which is different for each town.  For Brighton, you have to go in front of the zoning board with your proposal, and it has to be approved by the zoning board (and they only convene once a month).  However, in order to go before the board, you have to first submit a slew of paperwork, including the blueprints of the house, but also engineering plans for the property (including drainage and whatnot).  The cost to have the engineering plans done was going to be several thousand dollars.  We decided that we weren’t willing to risk a few grand to MAYBE be approved, or maybe not be approved (and more likely not).  We got out of the contract and looked elsewhere.  Lesson Learned: it can be extremely expensive and labor/time intensive to legally live in a tiny house.

At that point we decided that flying under the radar was our best option.  We posted an ad in the landlord section of craigslist, thinking rental property owners might be interested in making a little extra cash by having us move into the backyard, and knowing that if we were cited we would just get out of there.  We had a bite on the ad, and met with a property owner, which didn’t end up working out (highly visible, no parking), BUT the property owner talked to her friends and by word of mouth we ended up finding our first spot, which was in a stranger’s driveway.  I had researched the code, which was in Perinton, and their code allows for RV living for a period of 9 days, so this was semi-legal in the sense that we aren’t registered as an RV, but it seemed like a good enough loophole.  The only way a code enforcer would know you were living in the thing for more than 9 days would be if a neighbor called you in, but these people were friends with all their neighbors.  This ended up working out great for us, and they are now lifelong friends of ours, but it definitely could have gone terribly wrong, haha.  We lived there a little less than a year (this was our agreement from the start), paid for the electricity we used, along with a bottle of scotch per month.  Lesson Learned: strangers can be awesome and generous!

In the meantime, a coworker of mine who owned the farm we currently live on was interested in having us on the farm, but had co-owning family members who were not.  The property ended up changing hands to the next generation (my co-worker’s daughter), and they were interested in having us because they needed the extra help.  So we moved there and have been there for ~3 years.  They did not want rent from us, just help, so we pay for our electricity, a bottle of tequila (when the mom was there), a bottle of whiskey (current), and help out on the farm by working weekends during the christmas tree season and helping out otherwise with random things (fixing the tractor, drinking a bottle of whiskey, etc.)  The farm is also under Perinton Code, so the same as above applies.  However, we’re hidden in the woods so who knows if the neighbors even know we’re there.

Here’s the bad news:  we had no idea what we would do or where we would go when we started building, this all just kind of happened this way.  We’ve known people who have gone tiny and it didn’t work out.  Our plan C was always move into a trailer park (which is surprisingly expensive) if there were absolutely no other options, and then look at moving elsewhere, whether out of state or in this area.  If you aren’t willing to take those risks, pay the money (in the case of owning property), or deal with the red tape of getting a variance or changing some town code, then it’s probably not for you.

If you want to know more about our experience in each of the places we’ve lived so far, check out the Three Year Mark post!

2 thoughts on “Our Experience with Zoning and Tiny Houses in the Rochester, NY Area”

Share slices of adventurous, awesome travel to inspire others to venture into the unknown, away from resorts and canned trips.  Spread the Mindset!